OK, some of you may or may not know about the new Windows 7 beta (the release candidate 1).

For anyone interested this is the new version of Windows that looks to be out sometime at the end of this year.

To sum it up, it is a very good OS, much better than Vista (which was never as bad as everyone would lead you to believe). It seems to be faster and more stable than anything else before it. Not to mention being more feature-full and In my opinion at least, easier to use. These are of course all good directions for a new OS to take. I do however have one big gripe.

You see, one of the best features they were introducing were libraries.

These change the way things like the documents, music, and videos folders work (although you can apply this to anything). Your documents “folder” becomes a virtual folder made up of the different locations you specify. So say I have documents in C:UsersSome folder and I have data in D:meh. Well, then I just include these two locations and open my documents library and I see the data from both folders as one (you can set a default so it knows where to put new files). 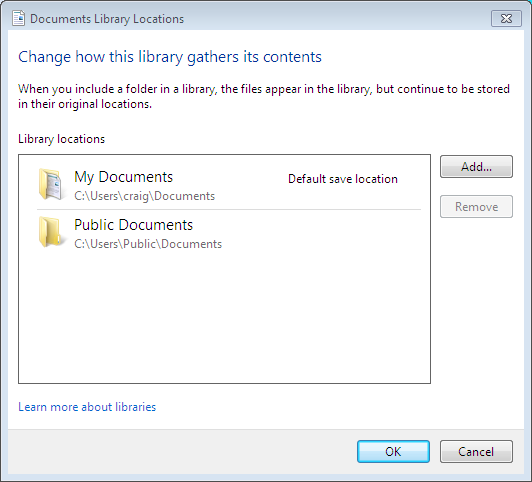 A feature like this would be amazing for things like the network setups I have in mind for the not so distant future. For example, I want my machine, Demelza’s machine, a Media center and a file server. The file server has two music folders. One for my music and one for Demelza’s music. That way our music is stored off the machines which is so much nicer for millions of reasons. My machine will link to my folder and Demelza’s machine will link to hers. Now on the Media center I want all our music to appear, so I include both locations and that’s it. It will always have our current music. The thing about libraries is they are live. So if I were to delete something from my machine, it would delete off the network storage and just vanish off the Media center (as it should do).

However, when I tried to add a Linux based machines shares (most Network Attached Storage is Linux based) I get the following. 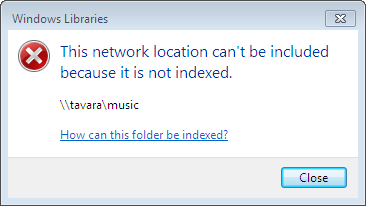 In short Microsoft, I can see where you are going with this error. However, you have just crippled one of the best features to come to Windows 7. I am so angry about this. This would have been so nice and you were so close, but then you broke it.

You see, from here we have a couple of options. Either you set your share to appear offline (which defeats the whole sodding point!) or you have a current Windows box to share from (not practical for home servers yet in my mind). It seems they have assumed a mesh network of data. So in my example above I would have my music on my machine, Demelza has her music on her machine and then the Media center picks it up from both. But then I now have to have more storage capacity in the machines, I then have to worry about backing up each machine, not just one location. In short, it is a mess.

Microsoft… You were so so close with this feature. Would you be so kind as to fix this. You see, this isn’t a feature, this is a bug. This is one of the most annoying bugs I have seen in some time. Not a good start.