The evolution of a workstation

I recently saw a blog post showing how someone’s desk and computer setup changes over the course of 10 years. While I have only been running my own machine since 2005 I thought it might interesting to go back and look at what I used to work with.

The only unusual thing is that when I first built my machine I was running dual CRT’s. If you keep out of a few specialist industries almost no-one was doing this (I have Thomas to blame for putting the idea in my head). 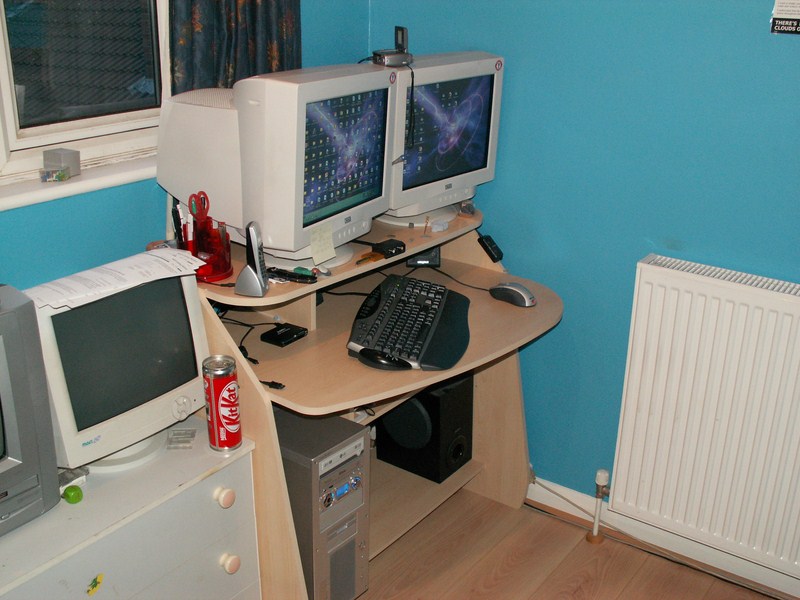 I ran that machine for just over a year before upgrading the RAM and adding a pair of 250GB disks.

Then another year after that I decided 2 monitors didn’t cut it anymore and CRT’s were far too large, heavy, power hungry and hot so I bought 3 new TFT’s. At the same time I friend built a custom desk for it to hold the monitors. Clearly I was less minimalist back then. 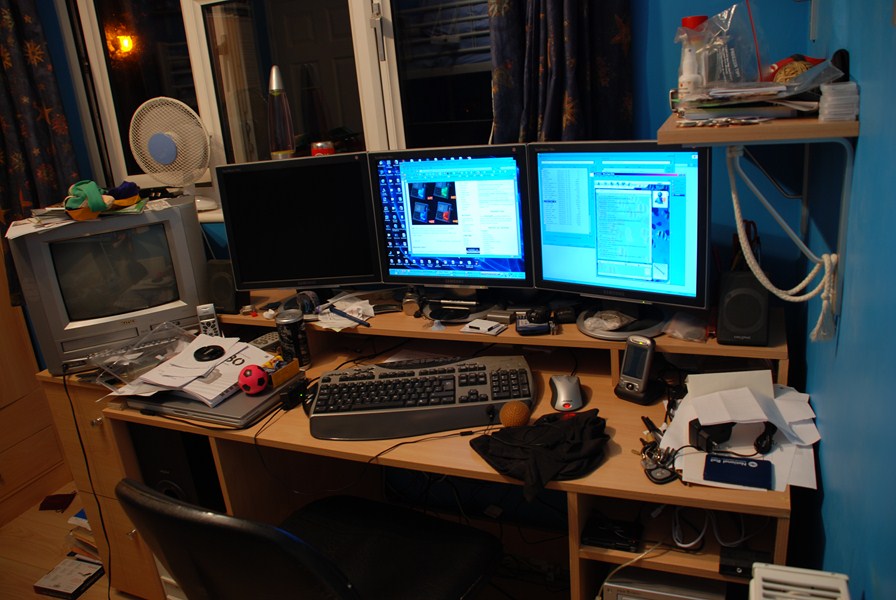 Unfortunately I only had a single graphics card then so I could only run one of them. Just before moving to Brighton I upgraded the core of the machine to have an Intel Q6600, 4GB of RAM, a pair of Geforce 8600GTS’s and a further 320GB disk. This is that machine in situ in Brighton. 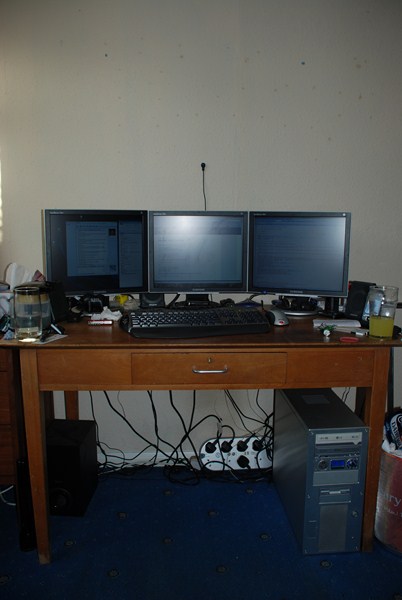 Another year, another location, still Brighton but we moved house. Same desk and same basic machine. At this point heat started to become a real issue with all that hardware packed into one machine. 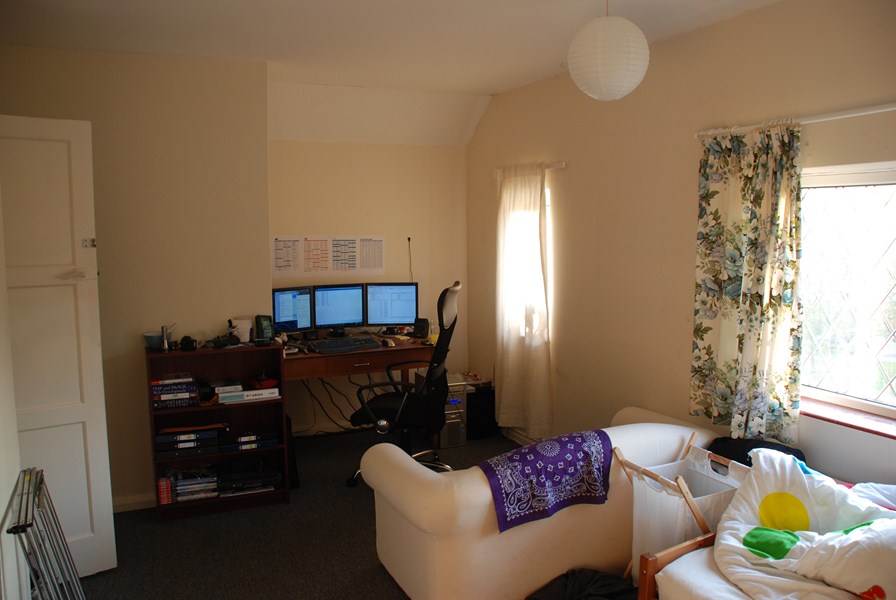 Then after another year in Brighton I moved into a flat in Plymouth with Demelza. Finally the machine made it out of my room and into a study. I’m not sure why one of the screens is off, I seem to remember it went through a few weeks of not working correctly. 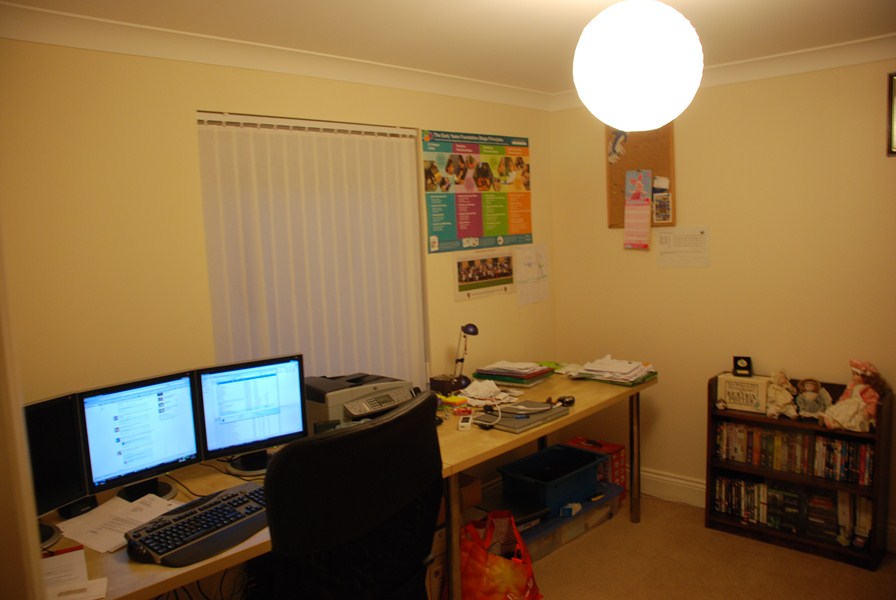 Having put up with the overheating issues for long enough I finally bought the huge case I wanted and moved the whole machine to that. I did at the same time install a new CPU cooler and PSU as well as build a monitor stand to get them back to the right height. 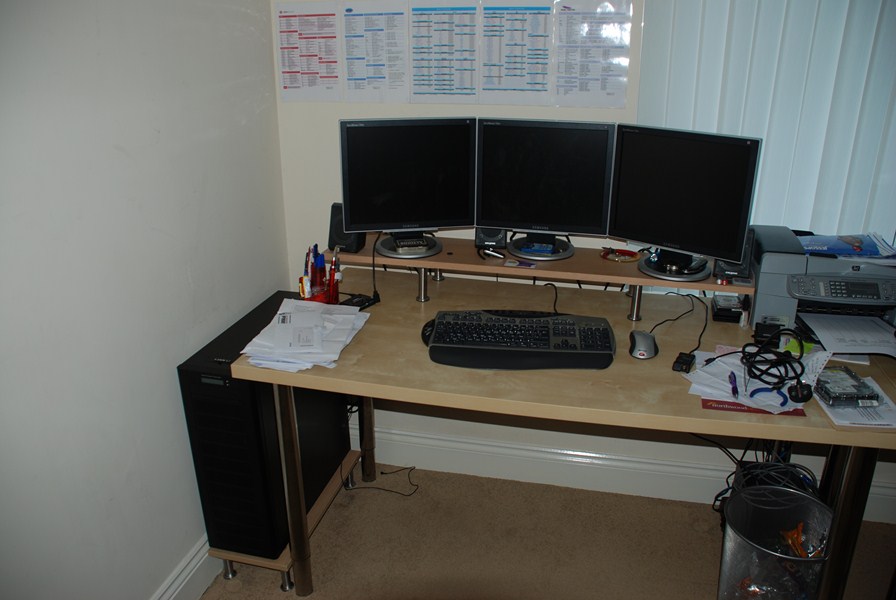 Then we come to today where we have moved into our house and have a different study. The machine looks the same on the outside but underneath has become an i7 32GB monster with a primary SSD for good measure. 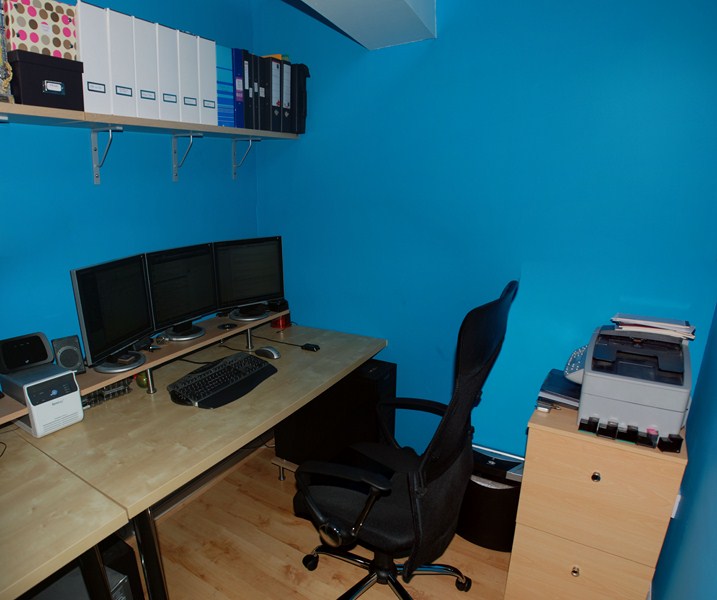 As to where it is going next… Well, the monitors will be the next thing to change. Having worked with 3 monitors for years now I can certainly say I am ready for more. The plan is to move to 4 main working monitors and perhaps use one of the old ones as a status monitor on the right. Who knows though, I am always looking for better ways to change my workspace to make my life easier… it just happens that more monitors is the solution that has worked thus far.