A little over a year ago I set out on yet another of my projects. This particular cunning plan was to put up multi coloured LED lights around the top of the lounge. The theory being that owing to our white walls we would have low cost lighting of any colour we wanted.

Me being me what started as simple idea quickly turned into a rabbit hole of complications and discoveries.

All of these different options combined with how long a run you wish to do and how many runs you need then affect what controller you can use. In my case I wanted RGB lights which connect using a 4 pin connector.

There are quite a few options online (eBay and Amazon are some of the best places to buy this stuff) when it comes to picking a controller. The most important feature to look for is power requirements. In you need 0.6 amps per meter of 30/m density.

With that in mind I needed double that as I am running 60/m which given my total run of around 11 meters means I needed a controller that could put out 13.2A

The longer the run of lights the dimmer they get so in an ideal world if you can parallelise your circuit as much as possible it will give a more consistent light. In my case I ran some trunking in the corner of the room and had two strips running out from there. While the longer run does get noticeably dimmer towards the end I can live with it as it is the wall with the curtains etc so there is enough going on to draw your eye you don’t really notice.

The cunning plan for fitting them at the top of the walls was as follows: 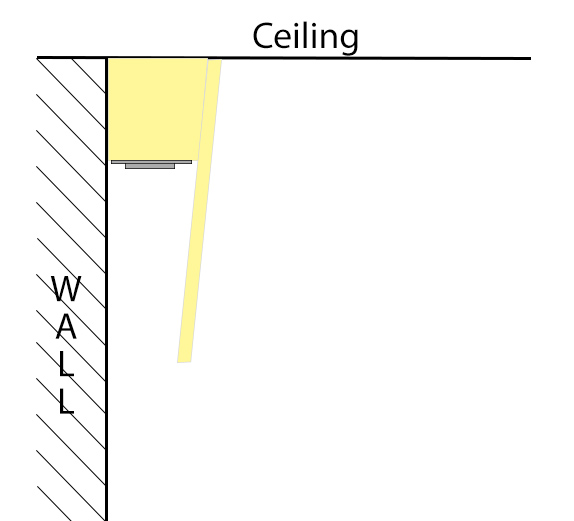 Basically I took a 10mm square baton, countersunk holes in it and fitted it to the wall at the very top. I actually angled the holes to force it to have a bit of an angle when fitting. I then stuck the LED strips in under it. Turns out the 3m tape on the strips was actually quite poor. I ended up super gluing it to the baton.

The video below was shot (some time ago) when I first put them up. At this point there are only two sides done, the wall the left was done not long after. Connecting round the corner was quite a challenge until I found companies making little adapters. I still had to do a lot of soldering at this point. Since I did this a number of better connectors have come out making it possible to snap fix these. You could now build this setup without any soldering.

You can also see the wires running up in the middle of the corner. These have since been hidden away:

After I had all the lights up and running I actually had a number of issues which I have procrastinated on. One of my soldering joints failed just before I finished boxing it all in. Due to the strips being super glued in I needed to take out the damaged strip and solder the smallest joint I could, upside down. This was not even as easy as I am making it sound as I was relying on the surface tension of molten solder to keep it from falling onto the carpet.

Thankfully that worked. I have also since replaced the controller with something that can better cope with the heat of being on for a while. The old controller was in a plastic case and got very hot, the new one has a built in heat sink and stays much cooler. It seems few people are actually making efficient controllers for these still, although this market seems to be forever changing.

Finally this is what it looks like with the cover piece on, painted and as it happens, with cards along it. Note the pink is not the colour we normally have it set to, but joyfully we can pick whatever colour we want. 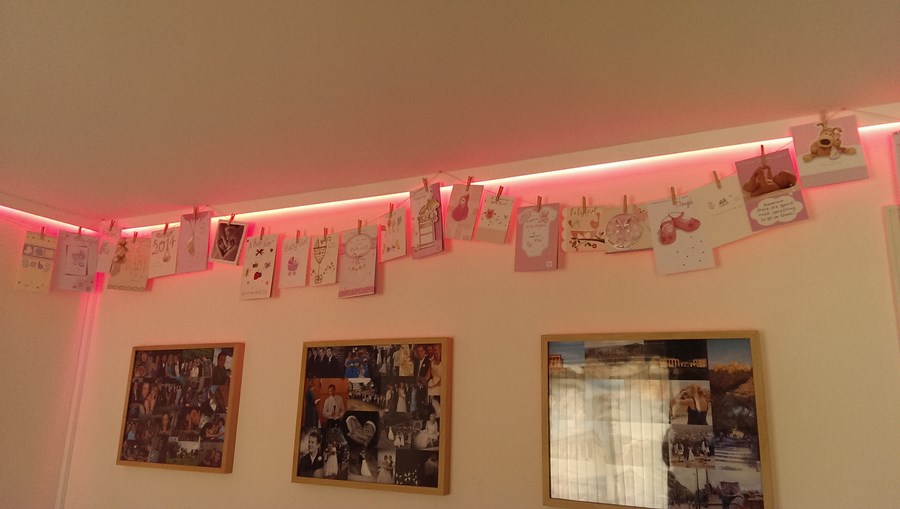