Some years ago Jonners put together a blog post showing some basic machine benchmarking scores using CrystalMark 2004. Being the competitive/curious fellows we all are, over a little while various friends and colleagues submitted their own scores to this post and it became a light-hearted competition (no-one actually put their machines together for this purpose, we are not that sad, but it did serve as an interesting way to compare them).

Since then over the years the tool has become less and less able to run fully, giving us no choice but to mostly let those scores stand as they are. With that in mind and given I just purchased a new Windows laptop (Dell XPS13 with 8th gen i7) we were looking for ways to compare machines again. In all those years we have always used http://www.cpubenchmark.net/cpu_list.php as one of the best ways to compare CPU’s and GPU’s. While it isn’t perfect, it is very comprehensive in the variety of units you can compare. So when we were looking for a tool to do some system benchmarking Passmark (their tool) was an obvious choice. So far those who have joined in this game have their scores in the table below. (Thomas also did a separate post with my initial score included)

Some of them are there to serve as a reminder how far things have come with no expectation of a high score, some of them show how actually even 5 year plus old CPU’s such as mine and Shaun’s are still more than capable today (both scores are without the over-clocking the k edition is more than able to take).

While as I write this I am top of the table, my PCIE M.2 SSD is a major reason for that and if others were to do something similar my score would be left behind by a number of them. I did however due to the age of my hardware have to go through the pain of adding a new module into my BIOS in order to get that drive to boot, so it was not an upgrade for most without a whole new motherboard/architecture.

For me the most interesting take home was that my new laptop is actually at a level of performance that I consider to be fairly close to comparable to my desktop. While clearly my desktop is getting on a bit in computing years, it is still very able. It just serves to demonstrate that laptops really have not stood still, especially in this most recent round of upgrades from Intel. It is now within sane reach to have desktop performance (minus graphics, although that is an option for larger laptops) in a very portable package.

Other benchmarks welcome, these were all done with version 9 of the trial.

And for the doubters of my scores, see below: 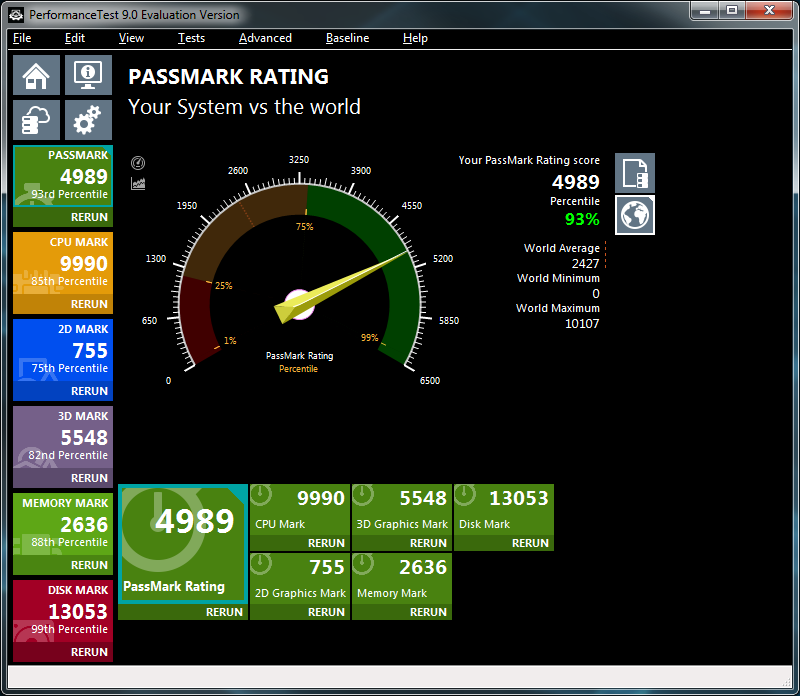 I have been knocked off my top spot thanks to my brother Andy. His build is an example of what happens when you throw down a huge pile of cash and see what happens. For me the CPU is very impressive, but for my money Ryzen is much better value, as shown by Jonners v2 and Rick.

We have a new winner. Rob’s the same spec as Andy in a number of key points. If anything I’m not sure why there is a win for Rob in this, the he looses more than he wins. Assume there is some odd weighting going on in the software. I suspect a up to date run from Andy will mean he has a short lived time at the top. Nice to see my disks still winning. That may also be short lived now.